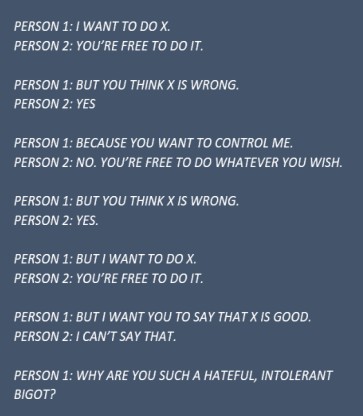 Why all the negativity? There is so much disrespect and lack of compassion toward others because of differences in beliefs, ideology and/or theology. I do not understand how those who profess to follow Jesus and profess love can be so hateful to others.   I read as people express an opinion on a topic or share their personal belief and are then mocked or disparaged by other “believers.” The image to the left paints a picture of what we see almost daily taking place on social media. I am bewildered by the action. How can one person profess love and Jesus yet disrespect, humiliate or hurt someone with different views or beliefs? How is that love or a reflection of Jesus?

As believers, we live in a constant state of battle in this world.  An ongoing war with an enemy whose only mission is to steal, kill and destroy (John 10:10) and yet knowing this, believers succumb to his tactics every day. He seeks to divide, destroy, deceive, and distract. To cause devastation, disappointment, disagreements, disbelief, and discontentment. He discourages, promotes discrimination, dishonesty, disillusionment, and creates disorder.  He brings destruction. And yet even though believers know this, they participate in his work.

So how does this affect relationships around us? How does the work of the enemy impact us in a personal way as a follower of Jesus? What does following Jesus even look like?

We first start by acknowledging that following Jesus does not come without sacrifice. In the book of Luke, Jesus is speaking to a crowd, and He tells them, “if you want to be my disciple, you must, by comparison, hate everyone else-your father and mother, wife and children, brothers and sisters- yes even your own life. Otherwise, you cannot be my disciple” (Luke 14:26).

That is such a powerful yet hard statement. However, though hard to hear, Jesus is not saying that we are to hate people because that goes against His command to love everyone (Matthew 22:39). Instead, the point He is making is that no one else in the world should come before Him.  There is no other relationship on this earth more important than a relationship with Him. That our love, devotion, and commitment for Him should surpass every other relationship on this earth. Jesus said, “Do you think I have come to bring peace to the earth? No, I have come to divide people against each other! From now on families will be split apart, three in favor of me, and two against- or two in favor and three against. Father will be divided against son and son against father; mother against daughter and daughter against mother; and mother-in-law against daughter-in-law and daughter-in-law against mother-in-law” (Luke 12:51-53).

As followers of Jesus we will not always agree with or share the opinions of others. We each are responsible for allowing the Holy Spirit to work in our lives and to reveal truth. But that means individually seeking after truth by spending time in Truth. Spending time with the Holy Spirit. Not relying on someone to find truth for us.

It is not up to any individual to decide what opinion or belief is right or wrong for another person. We are no one’s Holy Spirit. We each are imperfect people and because of our imperfection will not always be right which means it is not our responsibility to force our opinion, belief, or conviction on someone else. That work belongs to the Holy Spirit.  We can, however, plant the seed or share a belief/opinion but only if it can be done with love and leaves room for the movement of God and the Holy Spirit to work in the lives of those around us just as He works in our own.

So for those, who profess to be believers, yet choose to share opinions and do so by choosing to ridicule or humiliate friends, family or strangers with a different view, please stop.   Our responsibility as believers, while here, is to love Jesus with the entirety of our being and to share Him with others.  We have been given a mission. We are to go and make disciples. We are to introduce those around us to Jesus. We are to care more about the many who will spend an eternity in hell without Him than making sure our opinion is heard.  And that cannot be accomplished by working so diligently to push people away with our haughty attitudes and far from being like Jesus behavior.  We are called to live by example and that should be seen in word and in deed.  Because truthfully, who wants to listen to someone who mocks others? Or disparages those they are called to love?  Who wants what that person has or to be like that person?  That is the furthest thing from Jesus.  So instead respect and love one another.

We all need work.  No one is perfect.   A display of love and grace instead of negativity and disrespect just might be what is needed to lead someone over to your own way of thinking.  Just something to think about….Maybe 🙂

Those with knowledge know when to be quiet,

and those with understanding know how to remain calm.

Have you seen a person who is wise in his own sight?

Know that there is more hope for a fool than for him.

You shall love-”Love the Eternal One your God with everything you have:  all your heart, all your soul, all your strength, and all your mind – and love your neighbor as yourself.