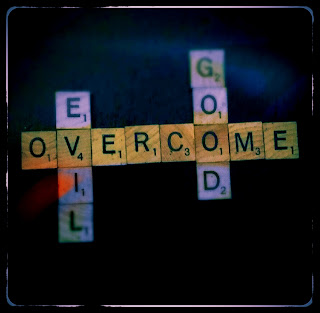 For years I lived in an oppressive situation.  Struggling for air,  I fought to keep my head above the water that worked to swallow me whole. I almost drowned.  In a situation that felt hopeless and dark my determination to survive brought me to a place of brokenness in a way that only Jesus could restore.
Years later, I am finding myself yet again facing great amounts of oppression but this time it is a spiritual attack.  An attack with an overwhelming weight looking to crush and destroy.  The devastating blows of these spiritual attacks leaves me nowhere else to go but my knees.
The enemy wants me.  He wants my marriage, my family, my ministry and each of those things which God has placed before me to live out according to His purpose for my life. This is my reality.
Daily it is an exhausting battle as I struggle to do the right thing but fear and doubt flood my mind leaving me to question whether I am strong enough to fight against each attack.
My faith is so much stronger than what it once was but I recognize my own weakness.  Though failure is not an option, I am still susceptible to the attacks.
With each fiery arrow released in my direction, my spirit weakens.  In my own strength, I am vulnerable.  On my own, I cannot fight this continued battle and win.
The difference in the person I am today and the person I was years ago is that I recognize the power of the enemy when I am vulnerable. I acknowledge in ways that are so evident to me today that in order to win this battle, I have to surrender every aspect of my life into the hands of my Heavenly Daddy.
He is longing to fight for me.  He is waiting for me to look up at His face and say, “I can’t do this!”  He longs to rescue me, to stand on the front lines of my battle and fight for me!
The words echo through my head…
The Eternal your God is standing right here among you,
And He is the champion who will rescue you…
Zephaniah 3:17
Now in my weakness, I call upon the only One who can rescue me from the grasp of my enemy.  The one who seeks to devour my life.  The life that Jesus traded for His own.   The enemy lurks around each corner and he is waiting to steal, kill and destroy every good and perfect thing God has placed in my life.
But I know, this battle belongs to the Lord!  I know this war is raging in the spiritual realms and my enemy wants nothing more than to declare my weakness before my God.
But not today! Today, I surrender.  I will overcome but it won’t be because of anything that I do.  My victory will come at the hands of my Heavenly Daddy whose grace alone is sufficient for me!  And it is only His grace that gives me the strength I need in my darkest and weakest moments.  (2 Corinthians 12:9)
There is victory!  Jesus won the battle when He defeated death but now I must trust Him enough to fight this battle for me.
Hey, Death!  What happened to your big win?
Hey, Death!  What happened to your sting?
Sin came into this world, and death’s sting followed.  Then sin took aim at the law and gained power over those who follow the law.  Thank God, then, for our Lord Jesus, the Anointed, the Liberating King, who brought us victory over the grave.
1 Corinthians 15:55-57