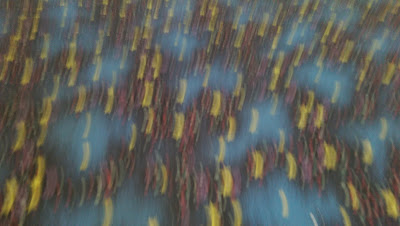 The darkness weighs heavy.  The silence, almost deafening. You step out into the sunlight only to find that the world you once knew, gone. Darkness distorts the landscape and faces encircling you. You begin walking, looking for something familiar only to find that you have stumbled into a world far from the one you once lived.
Familiarity and safety have evaporated into lingering moments of fear and isolation. Before you drifted off to sleep the night before, the world appeared normal. However, during the night, while you slept, something happened.  Everything changed.
While you slept, he slithered from under your bed and began to gnaw away at any semblance of normalcy you once knew.  The hiss of his lies filled the ears of the eagerly awaiting crowds as they devoured away at the gossip that allowed them to forget their own troubles for the moment. Suspicion and judgement crept into their minds as darkness began to make its way into the world you once lived.
And now, here you stand, alone and unable to recognize the landscape where you once found safety.  Everything has changed. The monster surfaced while you slept and succeeded with his plan to kill and destroy anything daring to step into his path.
This is your life. As you stand in horror and watch it begin to crumble you hear their shouts of betrayal.  “Adulterer, Slanderer, Unfit Mother, Drug Addict, Alcoholic!” Their chant rings through the streets as you stand in silence and disbelief.
While you were sleeping, sides were taken.  You never even stood a chance.  Defeat was determined the moment the monster spoke.
Standing alone, the cold trickle of betrayal makes its presence known. You part your lips to speak only to realize no one is listening. The hour of escape has passed.  Your moment of being heard, long gone.
But then, you hear a sound.  A faint whisper. You turn, searching for the object of its origin. But nothing. The words barely audible. You close your eyes and focus. You stand and wait.
The noise of the crowd is maddening. The chaos is crippling. If the noise would only stop if even for just a moment. And then, it happens. That voice, you hear it again.  It is as if you have been picked up and placed miles away from the crowd. The silence is beautiful as the melodic words fill the air.  Warmth invades your heart as you hear, “You are Mine. I have you!”
The voice is undeniable. You recognize the love, the peace as the words linger over you. You know the voice.  The familiar words offer hope to the anxious feelings of your heart as you realize, He is here!
The monster will not win.  Victory does not belong to those who seek evil. Yes, the monster will create chaos and leave a wake of destruction in his path, but he cannot destroy you.
You my darling sister are a daughter of the King.  He holds you in His mighty hand and covers you with the feathers of His faithfulness and love.  The darkness that surrounds you is only temporary.  Yes it is dark and cold but it has a purpose.  God has a plan.  He is going to use you.  He is going to raise you up.  He is going to take every broken piece that the monster has destroyed and restore it. But not just restore it.  He is going to redeem your story and give you wings that will allow you to soar above the chaos and see His hand at work.
My darling sister, it will take time.  It will be difficult. This kind of transformation is never easy but the reward will be great.  You will witness the power of God work in a way that you never thought possible.  You might not witness the demise of your monster but you will be in the hands of the most High and you will experience His love, His grace and His faithfulness in  way that will change you forever.
Hold on tight my beloved sister. Your journey has just begun.  The road will be rocky and the storms will rage but when the sun appears, you will know, you have been rescued!
Who will back me up when evildoers come against me?
Who is willing to take my side against the wicked?
If the Eternal had not come to my rescue,
my soul would have descended to the land where death silences every voice.
When I said, “My foot is slipping!”
Your unfailing love, O Eternal One, held me up.
When anxiety overtakes me and worries are many,
Your comfort lightens my soul.
But the Eternal has been my citadel;
my God, a sure safe haven.
Psalm 94:16-19, 22