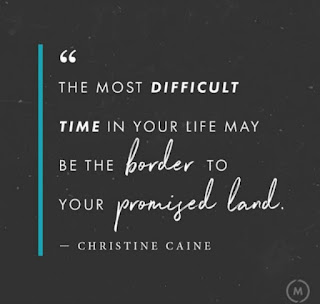 Almost two months ago, I declared to my husband that I was finished with God and all this religion bologna.  I was angry and hurt and for me, God was the reason for all my pain.

I had just sat through another Sunday sermon listening to a pastor go on and on about how we should read the Bible, be a part of a community of believers, go to church and pray daily.  I had spent the past two years doing these things fervently but to no avail was anything happening.  My life and marriage was crumbling around me and I was done!
That afternoon I shared with my husband that I could no longer put my “trust” in this “God stuff.”  I could no longer trust that some great purpose existed in all the pain I was experiencing.  Instead I professed all the religion stuff as nonsense and vowed to figure out on my own what came next in my life.
But God had other plans.  Funny how He works that way.
It all started with one line from a song we happened to sing that morning in the church service when I decided I was done with church.  We sang the song Remember and for whatever reason…I could not get the line “All through the struggle, and darkest days, I’ll remember the empty grave.”  Those words played on repeat in my head.  The more I attempted to push them away, the stronger I could hear them.  Frustration set deep within.  And then two days after that sermon, one of my closest friends sent a text suggesting we do a study on fear and anxiety together.  I didn’t have the heart to tell her just yet that I was done with this religion stuff and ignored her text.  But two days later, after days of that song ringing through my head and on Valentines Day, I sent her a text that simply said, “I’m in.”   Even in this moment, I’m uncertain as to why I agreed.  I just remember picking up my phone and typing the words.
Two days after Valentine’s Day, my husband and I set out on different “vacations.”  It was the first time ever we took separate trips.  Even against the advice of our counselor who had told us months before that she did not recommend such action in the state in which our marriage stood, we did it anyway.  And what a mess we created.  By the time I returned home, I felt completely broken, hopeless and even more distant.  I was certain our marriage had finally seen its last days.
Ten days from the day we had set out on our “vacations,” the study began.  A few days prior to beginning this study, as a last ditch effort, I asked my husband if we would do the study with me and he agreed.  I need to add that this wasn’t your normal Bible study.  This particular study is one in which you are given a passage daily and pretty much break it down into your observation and application of the passage.  So each day we were looking at a passage of scripture and really meditating on what it had to say.  The first few days I struggled to read the passage and even more to put pen to paper.  As for my husband, he didn’t even do the first couple of days.  I was discouraged.  I felt like I was wasting my time.  But as the week came to a close, my heart was beginning to soften and my husband had completed the weeks worth of passages.
Over the course of the last six weeks, our marriage has been tested.  But God has pursued us both.  Over the course of the last six weeks, we have wanted to give up, but God has shown up. We have seen Him through a passage of scripture we were given in the study deal with us right in that moment and then realize God knew in that moment we would need the reminder. And we have been totally overwhelmed by His sovereignty as the passages from our study lined up directly with a book by Max Lucado we are reading together. God has not left us alone to figure this out but instead made Himself known, reminding us that He is holding us in His hands and close to His heart.
Today is the final day of this study and what a whirlwind the last six weeks have been.  Through the enormous stressors of trying to move, completing school work and caring for my family, life has been a ridiculous roller coaster.  Emotions have been high, anxiety deep and patience tested.  But we have prevailed.  The last six weeks have been a transformation of sorts.  God has clearly been working in my heart and the heart of my husband.  Priorities have shifted.  Attitudes and hearts have softened. Forgiveness and grace extended. The realization that we have been given a “thorn in the flesh” so that we learn the sufficiency of God’s grace has brought humility.  We together have grown closer to one another and closer to God because we do not have all the answers.
Today our last passage for this study was Proverbs 3:5-8.  It is one of the very first passages (Proverbs 3:5-6) that I had my kids memorize when they were little.  It holds such a place of significance in my life and could not have revealed God to me in any greater way this morning as I read it.
Trust in the Lord with all your heart;
do not depend on your own understanding.
Seek his will in all you do,
and he will show you which path to take.

Proverbs 3:5-6
There is a worship song my daughter introduced to me months ago that I have listened to countless times over the course of the last few months.  It is called Reckless Love.  And the chorus says…
Oh, the overwhelming, never-ending, reckless love of God

Oh, it chases me down, fights til I’m found, leaves the 99
I couldn’t earn it, and I don’t deserve it, still, you give yourself away
Oh, the overwhelming, never-ending, Reckless Love of God

And that is exactly where I am.  Found!  He chased me down, and as the tears stream down my face while I type these words, I know I couldn’t earn or even deserve His love but I am so incredibly thankful for His reckless love and the way He has fought for me and my marriage!