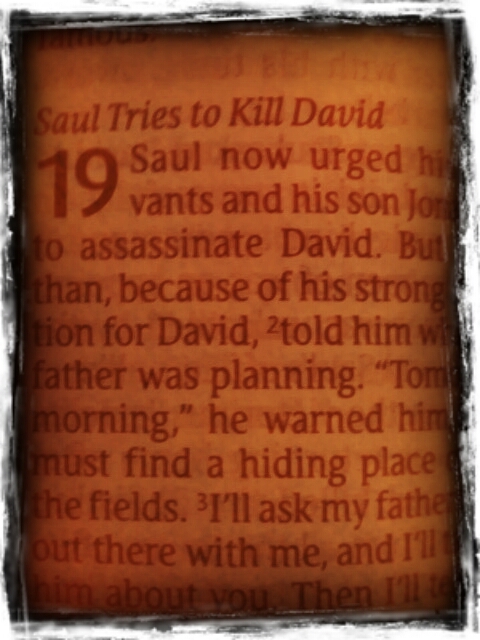 It is exciting to be part of His story. Having no idea how the story will play out although being fully aware of His movement in your life. All you can do is grasp hold of His hand and allow Him to lead. There can be fear not knowing exactly where you are going. Each step is not always easy and stable. You may even question whether or not it is His hand you’re holding but you choose to follow His steps and trust His guidance in obedience.

In life we experience opposition when obeying God instead of those in our lives. Opposition can leave us doubting what we so strongly hear God telling us to do. We must remain focused.

Now I do not believe that God creates the opposition experienced by His children  (though He does allow it) but instead believe it is created by sin and the schemes of Satan. There are stories throughout the Bible that exemplify choosing to walk by faith instead of sight when facing opposition. David dealt with much opposition from King Saul.

This particular story begins with King Saul ordering the murder of David. I’m pretty certain there is probably not much greater opposition than someone ordering you to be killed especially when those orders are issued by a King.  I’m also pretty certain that murder is a sin meaning Saul was not acting in accordance to God’s will.

David spent much time running and hiding from King Saul until one night he found him unprotected and asleep. David had the perfect opportunity to “take out” Saul but he refused. Instead he chose to trust that God would “take out” Saul in His appointed time. David knew God had a plan and he waited. He did however take Saul’s spear and water jug and later confronted Saul.  During this confrontation, Saul admited to his sin, asks David to return home and assures his safety. What a moment!! Imagine being David and standing before a man who wanted you dead. It was clearly a God ordained moment but a moment used by God to test the heart of David.

Many deal with injustice but what matters is how we choose to responsd. It is our response that reflects the true condition of our heart and whom we serve. Whether opposition comes from an ungodly person or a fellow believer, God will judge all people. Like David we must trust in the Lord that He alone will deliver us from opposition because God is just and WILL enact His justice!!

God’s word promises that He will deal justly with those who treat us unjustly. What a relief especially when we have been beaten and are exhausted. Saul was dealt judgments by God because of disobedience. He lost his kingdom and it was given to David. Israel was defeated by the Philistines the next day and Saul along with his sons died in battle. This great downfall was all a result of his disobedience.

You see as king, Saul was the spiritual leader of his people. (Just as pastors are spiritual leaders of their churches and husbands spiritual leaders of their homes) This means that as king he was accountable in great measure in his example of faith and obedience. Saul obeyed God to a point but selfishly refused to obey God all the way. Saul’s life reflected that of a double minded man. (James 1:8) His life reflected confusion between his faith and fleshly living meaning he held back part of his life from God.

I believe God deals with the unjust. I believe those that have treated me and others unjustly will in fact be dealt justly by God. It is hard to stand back and wait when the world yells fight but as a child of God, revenge is not to be my motivation. Instead we must be motivated by His love in order to walk by faith and do what is right. God’s just is perfect and because we know this, we can be confident when dealing with opposition. By being confident, we are then free to love, forgive and walk by faith.

Dealing with opposition requires strength and courage. When you feel like the world is against you, human nature screams give up but God gives us the strength to survive and endure.

When God is for us, who could ever stand against us? (Romans 8:31) When the world comes against us, Christ Jesus, the God of the universe is for us!!

Remember that opposition comes from the enemy and can come from anyone in our life. Remember that Satan is opposed to God, His word and His children. It is Satan’s plan to turn people away from God. As a Christ-follower we have to be aware that we will face opposition and unjust accusations. Remember that Jesus walked a perfect and blameless life and was still crucified. We must be patient and endure. (1Peter 2:19-21)

If you’re walking through life receiving high fives and gaining the approval of man from your choices, take heed. Chances are you are walking in the flesh and not by faith and obedience. God will enact His perfect justice.